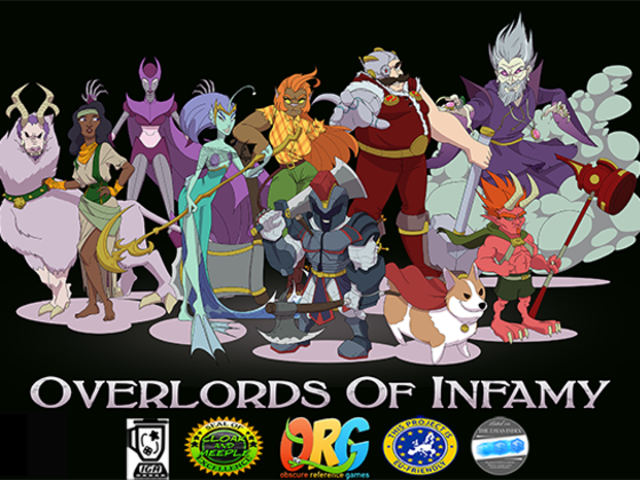 Here we are. The final 24 hours. The last update until we're done. I'm going to stop writing short sentences.

Oh! I have a treat for you! Introducing: Sir Tyrano de Bergerac!

These are initial sketches and subject to change, but we think they're a good foundation!

There is a very real possibility that we will exceed the 33k Stretch Goal tonight which will unlock wooden relic tokens. However, we still have 24 hours to reach our $40,000 stretch goal, Achievement cards! Achievement cards allow players to complete goals during their game which will earn them extra points at the end of the game! We can do it!

I issued a challenge to backers to share/retweet posts that I made 70 times to unlock The Dead Pirates Robhearts in all her gory glory. So far, posts have been shared/retweeted a total of 52 times! 18 more shares or retweets and we get to include this awesome new Overlord in the game!

Alright. A lot can happen in 24 hours. Let's see what you can do! This is our last chance to get the word out and share this project with your friends! Thanks for all of your help thus far!

You know that when the timer switches from days to hours you're getting close.

We're almost there, my friends.

The dinosaur with a penchant for theatre and formal fashion is still a work in progress, with initial sketches to debut soon. However, we do have the initial artwork for his lair. Behold, the ultimate bachelor pad for a Cretacean gentleman:

And lest we forget about this fetid femme fatale, I have good news! I made an offer in a previous update that if we were to get 70 shares or retweets of particular posts, we would add The Dead Pirate Robhearts to the Waffles promo pack. Well, it looks as if you took well to that offer, as we currently have 31 shares/retweets! We could use a bit more of a push, and I know we will get there before the campaign ends!

I am pleased to announce that not only did you rise to the challenge of my social stretch goals, but you also smashed through it! We have met and exceeded both the Twitter and Facebook Social Stretch Goals, meaning we will be adding 3 new Nefarious Plots and 2 New World events to the game! Give yourselves a pat on the back!

We still have 61 hours to go, with a few goals left to hit. Help me out by spreading the word and telling your friends! We can smash these last few days out of the park!

It seems like this campaign just started, but here we are with 5 days left!

Now is the time to share the project with your friends and help them get in on the ground floor with all of you awesome backers!

By now you may have realized that we did not reach our goal of $30,000 by Wednesday 3/17 to include The Dead Pirate Robhearts. However, we still want her in the game and we think that you do too! So I'm going to make you a deal! The Dead Pirate Robhearts will be in the Waffle's Promo Pack (included in all Kickstarter copies of the game) if 70 people do the below before the campaign ends:

33 more Likes on our Facebook page and we add in 3 more Nefarious Plots! Almost there!

That's all I've got for you today. Until next time, I'm your faithful Lackey,

It seems like over the weekend, someone completed the Nefarious Plot to set clocks an hour ahead. I am lamenting it today for sure… But then I remembered it’s Pi Day!

In honor of Pi Day, I am offering a special goal that will expire at 11:59 PM PDT:

I’ll be speaking with the Legends of Tabletop gang during their show on Tuesday 3/15 at 6:00 PM PDT. Tune in if you want to listen to me trip over my words and make a mockery of the English language!

In case you didn’t know, I have a little bit of a thing for steampunk themes. Naturally, I was drawn to back Steam Court, by Tantrum House, because it looks just plain awesome, as well as fun! Might want to give it a look yourself.

That’s all I’ve got for you today! Until next time, I remain your faithful Lackey,

Wow! You are simply awesome. There is no other way to explain how we just....

Hero Quests add another layer of conflict and complexity to an already chaotic world. As the hero bumps off Lackeys and liberates your rightfully exploited land, he will collect resources that work toward his special quests. Once completed, these quests will make things harder for the Overlords. If too many quests are completed...well let's hope that doesn't happen!

Single-Player Mode makes use of the Hero Quests to set a race against the clock. The Overlord will compete against the Adventuring Hero to complete Nefarious Plots before the Hero is able to complete his Quests. Can you outpace and outlast him?

After only a day, we're well on our way to our special timed goal. If we are able to hit $30,000 before Wednesday 3/16, we will add in the Dead Pirate Rob-Hearts to the Waffles promo pack. The Dead Pirate was the very close second place to Tyrano de Bergerac in the backer poll that ended on Wednesday. Let's do it!

It's been a while since I last highlighted a project that I'm excited about, but I am back to share a great campaign!

TAU CETI: Planetary Crisis is an awesome looking game of exploration, rich strategy and space combat. Check it out for yourself and consider backing it while you can!

That's it for today, Overlords-In-The-Making! Until next time, I remain your faithful Lackey,